The Club was formed in 1950 by Dr Alex Brenan, the Island's local doctor. He was a very keen sea angler and kept his motor launch in Mengeham Creek on moorings rented from Cole Bros. of Salterns Quay. He called a meeting of other creek users with the idea of forming a club after first ascertaining that the vacant timber building was available.

This was originally the clubroom of Hayling Island Sailing Club before they moved to their present premises at Sandy Point in 1936. In the late 1940s it was home to Harry & Betty Bowen and their daughter, Glenys, who subsequently married Paddy Lamperd (a long time member of our club. Dr Brenan had visited the house and discovered that it was up for sale.

The property and surrounding land was owned by Read Admiral Ralph Fisher, D.S.O. and family.

At the meeting it was agreed to form a club to be called the Mengeham Rythe Fishing and Sailing Club and be open to interested boat owners of moderate means. The first commodore was Dr Brenan, with the owner of the property, Rear Admiral Fisher accepting the position of President. The annual rent was £50.00. 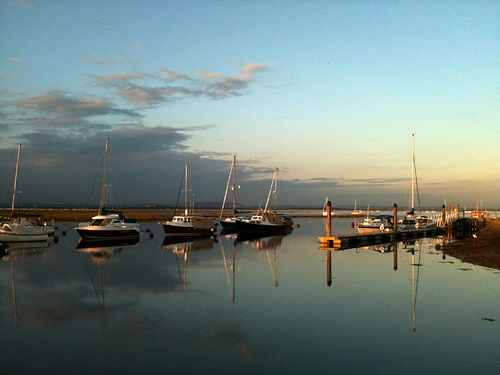 First clubhouse from the air 1950s

After ten years or so the fishing side was dropped as more people came into sailing. About the same time Rear Admiral Fisher decided to move from Hayling Island and the club was offered the building, Coles Quay and buildings ie. The Salt House, the Black Shed, etc. (Cole Bros having retired), sixteen acres of marshland, including old Oyster Beds, for the sum of £6000.00. By raising loans from members and the bank, the property was purchased.

This watercolour of the Old Clubhouse was painted by Les Hudson in 1972. The view from an upstairs window of a house in Marine Walk, shows the open pasture aspect of the area, with ponies grazing on it, and a number of boats, both ashore and on the chain moorings. The original can be seen on a wall of the central staircase.

In 1973 a new and larger timber building was erected by club member on the same site as the original to cater for the growing membership. The building was acquired from Ford, Dagenham. It had been the canteen and was dismantled onto a lowloader and transported to Mengeham. It was erected on stilts and the area underneath was used for storage. It was later filled in to make room for showers, etc but it was freezing in winter.

Then the club was offered the chance to purchase the Tidal Mooring areas of Mengeham Creek plus mudland bordering the club boundary from the estate of the late Captain Ivan Snell of Tournerbury, a fine supportive family of the Island. We were pleased to purchase these tidal areas as it gave us protection and secured the future and safety of our eighty or so moorings for our cruisers and dinghies.

The club officially opened its current clubhouse in September 2003. The building of a new clubhouse was made possible by a grant from the Sport England Lottery Fund for community projects and supported by the Royal Yachting Association. This, together with a grant from the Foundation for Sport and the Arts towards a Junior Training Room, as well as grants from Havant Borough Council and the Hampshire Playing Fields Association, enabled the club to provide up-to-date and larger facilities including modern changing rooms and toilets, dedicated training areas, as well as office space and a new kitchen (galley).

The Club Burgee depicts the green ground of Tournerbury Woods opposite the club where an ancient encampment is known to exist. The Heron in flight is because of the heronry in the woods reputed to have been mentioned in the Doomsday Book.

The oyster management and salt panning carried on here as well as an experiment to extract gold from the sea water can be found in the books "The King Holds Hayling" by Major Thomas and Longcrofts "Bosmere Hundreds". In spite of all the improvements that have gone on since 1950, the Club still holds dear the founder's wish "A Club for all of moderate means".